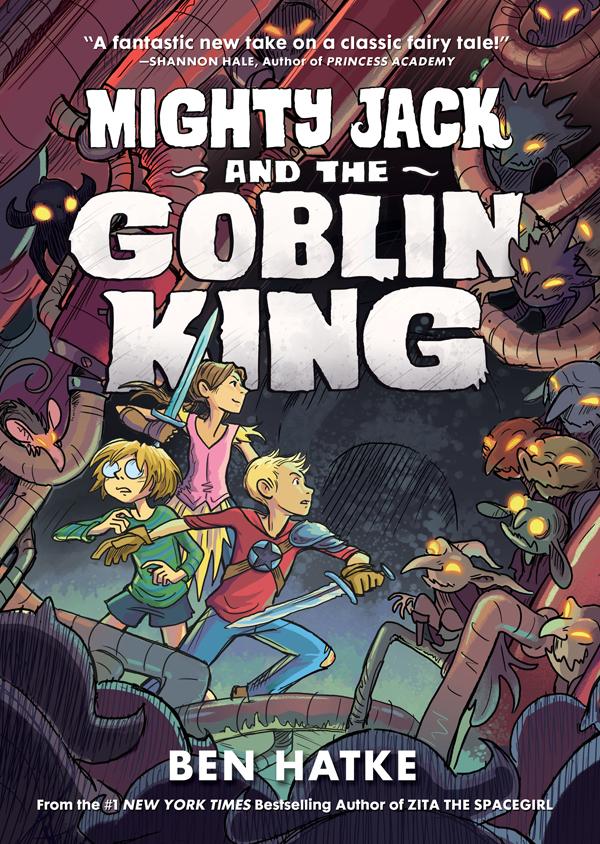 Like a bolt from the blue, Jack’s little sister Maddy is gone—carried into another realm by an ogre.

When Jack and Lilly follow Maddy’s captor through the portal, they are ready for anything . . . except what they find waiting for them in the floating crossroads between worlds. Even the power of their magic plants may not be enough to get them back to earth alive.

Alone and injured, Jack and Lilly must each face their own monsters—as well as giants who grind the bones of human children to feed their “beast” and a fearsome goblin king in the sewers down below.

But when Jack finds himself in a tough spot, help comes from the most unlikely person: the goblin king!

Ben Hatke, the #1 New York Times–bestselling author of Zita the Spacegirl, concludes his latest middle-grade fantasy-adventure graphic novel series, Mighty Jack, with the energetic finale to his retelling of Jack and the Beanstalk

Booklist (July 2017 (Vol. 113, No. 21))
Grades 3-6. At the end of Hatke’s series starter, Mighty Jack (2016), Jack and Lily chased after the plant ogre that spirited Jack’s sister, Maddy, away through a portal. The story picks up immediately afterward as Jack and Lily clamber into an utterly unknown place, where strange floating islands are connected by thick vines. Driven by the urge to rescue his sister at all costs, Jack brashly presses on, and when he and Lily get separated, he continues up the vine, while Lily finds herself among a gang of friendly goblins, though they have some ulterior motives. As he did in the first book, Hatke fills his full-bleed pages with hordes of fantastic monsters rendered in wild, organic shapes, and he further enlivens the story with snappy, comical dialogue. Well-wrought action scenes clearly depict the many battles, and swooping perspectives make the kid heroes look even more gallant. Fans of Hatke’s Zita the Spacegirl series will be especially delighted by the cliff-hanger ending, which ensures many more adventures for the plucky, clever kids.

Kirkus Reviews starred (July 1, 2017)
Jack and Lilly return in a new adventure in which they must navigate a fantastic and foreign land to save Jack’s autistic sister, Maddy.The story dives in where Mighty Jack (2016) had left off on a breathless cliffhanger, which finds Jack and Lilly emerging through a strange, keyhole-shaped portal in order to save Maddy from a fierce monster. Rather like Alice down the rabbit hole, the kids find themselves in an unfamiliar world where they must climb a tenuous beanstalk and face vicious, biting rats, lovably bumbling goblins, and fearsome giants. Hatke’s reimagined fairy tale is a masterpiece that blends all the familiar elements of “Jack and the Beanstalk” with a decidedly fresh eye in a visually arresting graphic format. His art, brilliantly colored by Campbell and Sycamore, is vividly kinetic, taking over with many wordless action scenes that fire off with rocketlike propulsion. Though Hatke’s cast is predominantly white, he gives diversity a nod with an autistic main character and defies gender convention when another female character is crowned king. Though Jack is given sole titular credit, he and Lilly share the heroic spotlight in this installment, as she is every bit as mighty and important as he. Expect demand for the next installment to be through the roof; Hatke’s brilliant final scene should elicit audible exclamations from fans of his work. Another outstanding adventure from a master storyteller. (Graphic fantasy. 7-14)

Ben Hatke is the author and illustrator of the New York Times–bestselling Zita the Spacegirl trilogy, the picture books Julia’s House for Lost Creatures and Nobody Likes a Goblin, and the graphic novels Little Robot and Mighty Jack. He lives and works in the Shenandoah Valley with his wife and their boisterous pack of daughters.

Mighty Jack and the Goblin King on Amazon

Mighty Jack and the Goblin King on Goodreads

Mighty Jack and the Goblin King on JLG