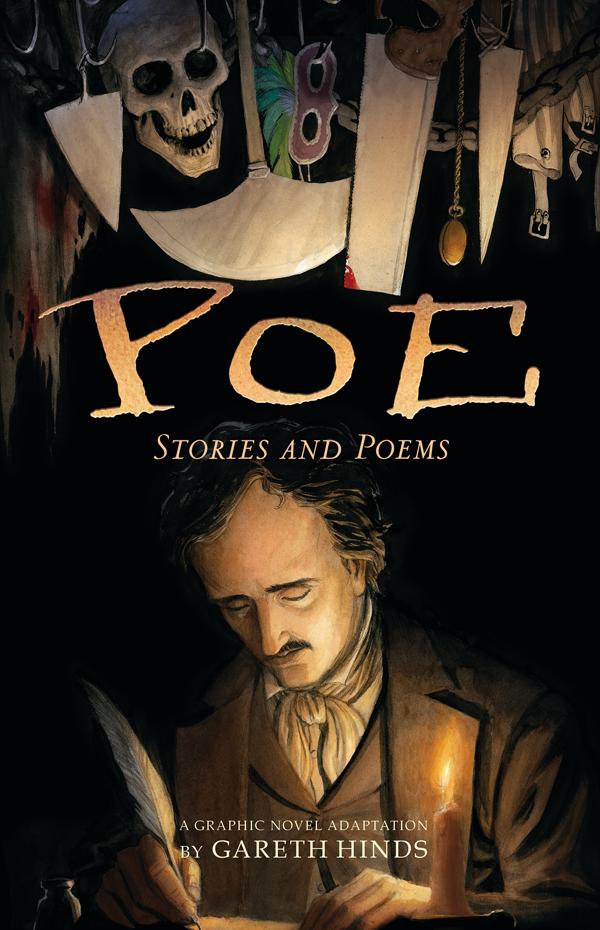 It is true that I am nervous. But why will you say that I am mad?

In “The Cask of Amontillado,” a man exacts revenge on a disloyal friend at carnival, luring him into catacombs below the city. In “The Masque of the Red Death,” a prince shielding himself from plague hosts a doomed party inside his abbey stronghold. A prisoner of the Spanish Inquisition, faced with a swinging blade and swarming rats, can’t see his tormentors in “The Pit and the Pendulum,” and in “The Tell-Tale Heart,” a milky eye and a deafening heartbeat reveal the effects of conscience and creeping madness. Alongside these tales are visual interpretations of three poems — “The Raven,” “The Bells,” and Poe’s poignant elegy to lost love, “Annabel Lee.” The seven concise graphic narratives, keyed to thematic icons, amplify and honor the timeless legacy of a master of gothic horror.

Booklist (July 2017 (Vol. 113, No. 21))
Grades 8-11. Veteran illustrator Hinds breathes vivid life into seven of Edgar Allan Poe’s most well-known stories and poems in his latest adaptation. Faithfully preserving the gothic tone of the original texts, from the macabre endpapers filled with symbols of death to the twisted anguished faces found throughout its pages, the author never shies away from the darkness found there, instead distilling Poe’s fascination with madness, death, and terror into single haunting images: a sliver of lamplight shines on a milky blue eye in “The Tell-Tale Heart,” and a shadowy black raven haunts a solitary figure reminiscent of Poe in its namesake poem. Color is used to full effect in each story; the garish colors of an ill-fated party foreshadow impending doom, while the saturated red surrounding a man about to die only serves to heighten the emotional intensity. Title pages include a key to the main themes and year of publication, while an author’s note provides an overview of Poe’s life and insight into each story and poem. A welcome addition for fans of graphic horror.

Horn Book Magazine (November/December, 2017)
Graphic novelist Hinds (The Odyssey, rev. 11/10; Macbeth, rev. 3/15) continues his tour through the classics as he takes on the work of Edgar Allan Poe, adapting three poems (“Annabel Lee,” “The Bells,” and “The Raven”) and four stories (“The Masque of the Red Death,” “The Cask of Amontillado,” “The Pit and the Pendulum,” and “The Tell-Tale Heart”). A “Poe Checklist” at the beginning enumerates a dozen common themes and tropes (e.g., “creepy animals,” “premature burial”), and the title page for each entry lists those that are pertinent. As always, Hinds’s adaptations lean heavily on the original language of the text with an eye toward accessibility for the modern reader and an understanding that the illustrations will carry a good portion of the narrative. Hinds’s varied illustrations are a good match for Poe’s atmospheric blend of horror and mystery. The pictures are often dark and shadowy, but color is used judiciously throughout to great effect; “The Masque of the Red Death” has abundant flourishes of red, for example, while “The Raven” is in black and white. Striking imagery, too, catches the eye and the imagination. The final spread of “The Bells” looks up into a bright full moon to see not just the church bell but also the ghouls looking like veritable gargoyles come to life. An appended author’s note gives general background on Poe and additional insight into each story or poem. jonathan hunt

Gareth Hinds is the acclaimed creator of the graphic novels Macbeth, The Odyssey, Beowulf, Romeo and Juliet, The Merchant of Venice, and King Lear. Gareth Hinds lives near Washington, D.C.

Poe: Stories and Poems on Amazon

Poe: Stories and Poems on Goodreads

Poe: Stories and Poems on JLG