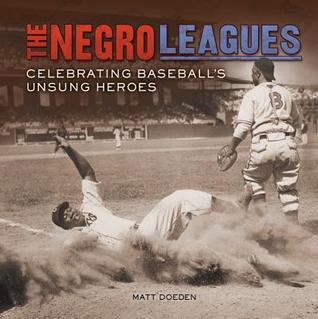 After the Civil War (1861-1865), the earliest seeds of professional baseball began to sprout. While racism was rampant, some early teams featured black and white players competing side by side. But by 1900, segregation forced African Americans to form their own teams. Black players traveled around the country on barnstorming tours, taking on all challengers. In 1920, baseball’s Negro leagues started, and for more than three decades, they offered fans a thrilling alternative to Major League Baseball. Explore the riveting history of the Negro leagues, including some of baseball’s greatest (and most unheralded) players, biggest games, and wildest moments.

Booklist (November 1, 2016 (Vol. 113, No. 5))
Grades 5-8. After WWI, the competitive Negro leagues emerged, along with some of the greatest and most entertaining players in baseball history. This informative volume offers a thoughtful introduction to the players, teams, and leagues, which were formed in response to the segregation of professional baseball in the U.S. during the late 1800s. From the Spectacular Sports series, which includes Doeden’s The World Series (2014) and The College Football Championship (2015), the book has a large, square format that offers ample space for text and sidebars as well as archival photos of teams, players, and managers. Presenting a concise and very readable history of the Negro leagues, Doeden’s account is particularly strong in placing events within the broader social context of racial intolerance, segregation, and gradual integration, and his chapter on legendary players is not to be missed. The many well-chosen quotes are sourced in the back matter, which also includes a short list of books for further reading. This well-researched book will be a worthwhile addition to any baseball collection.

Kirkus Reviews (November 1, 2016)
A broad survey of African-Americans in baseball, from the end of the Civil War to the era of Jackie Robinson and the last of the barnstormers.Though far from “unsung” considering Kadir Nelson’s soaring We Are the Ship (2008) and the plethora of both general histories and individual biographies available, black players from Robinson, Satchel Paige, and Josh Gibson to less-prominent ground breakers such as Moses Fleetwood Walker, Rube Foster, and Toni Stone certainly merit another tip of the cap. Unlike Nelson, Doeden doesn’t pull readers out onto the field of dreams. Instead, mixing in notable games and spotlight player profiles, plus plenty of team and individual photos, Doeden offers a fluent if standard-issue chronicle of the rises and falls of significant Negro Leagues and independent teams in the wake of professional baseball’s exclusion of African-Americans. (Other minorities get no more than a few references and an intriguing group portrait of a diverse “All Nations” team from around 1915.) Also, in a closing “Legacy” chapter, he brings his account up to the present by analyzing, albeit in a superficial way, the modern decline in the percentage of African-Americans in the ranks of the modern major leagues. It’s conventional fare, but it’s systematic and at least a little broader in scope than older titles. (notes, further reading, index) (Nonfiction. 10-13)

Matt Doeden was born in southern Minnesota and lived parts of his childhood in Golden Valley, Minnesota, and Madison, Minnesota. He studied journalism at Mankato State University, where he worked at the college newspaper for three years. In his senior year, he served as the paper’s Sports Editor, which put him in charge of the entire sports section, the sports writers, and the photographers. He covered mostly college sports, but also the Minnesota Vikings, who held training camp at MSU.