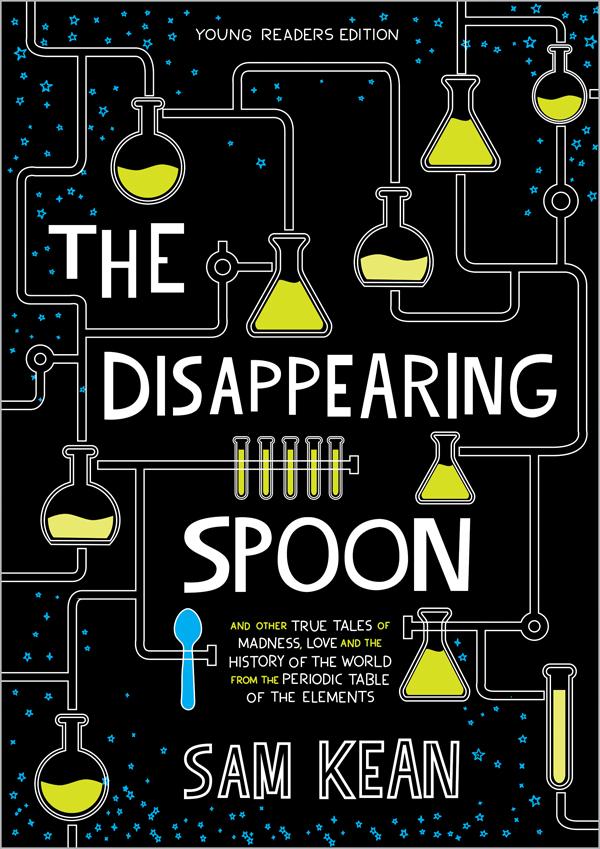 A young readers edition of the New York Times bestseller The Disappearing Spoon, chronicling the extraordinary stories behind one of the greatest scientific tools in existence: the periodic table.
Why did Gandhi hate iodine (I, 53)? How did radium (Ra, 88) nearly ruin Marie Curie’s reputation? And why did tellurium (Te, 52) lead to the most bizarre gold rush in history?

The periodic table is a crowning scientific achievement, but it’s also a treasure trove of adventure, greed, betrayal, and obsession. The fascinating tales in The Disappearing Spoonfollow elements on the table as they play out their parts in human history, finance, mythology, conflict, the arts, medicine, and the lives of the (frequently) mad scientists who discovered them.

Adapted for a middle grade audience, the young readers edition of The Disappearing Spoon offers the material in a simple, easy-to-follow format, with approximately 20 line drawings and sidebars throughout. Students, teachers, and burgeoning science buffs will love learning about the history behind the chemistry.

Booklist (January 1, 2018 (Vol. 114, No. 9))
Grades 7-12. Even Amazon.com can’t claim “bubbles, bombs, toxins, money, alchemy, petty politics, history, crime, and love” in one place. This history of the periodic table of elements, a young readers edition adapted from the adult best-seller, turns a seemingly dull topic into a treasure trove of scientific discovery. As Kean introduces such essentials as the periodic table “castle,” what an element is, fathers of the periodic table, and where elements come from, he weaves in stories of awe and amusement about pioneering scientists. From the CIA’s (unattempted) plan to assassinate Fidel Castro with thallium to aluminum’s 60-year reign as the world’s most precious metal to the mood-stabilizing effects of lithium on poet Robert Lowell, the best tales derive from the elements themselves and bring together chemistry’s relationship with economics, social history, politics, psychology, and even the arts. Although the author does an excellent job of explaining elements and chemical properties, students with a basic understanding of chemistry will appreciate his narrative more. This solution to dry lectures will spark a positive reaction in readers.

Kirkus Reviews (February 1, 2018)
This adaptation of a book for adults meanders through the history, uses, and misuses of the periodic table’s elements. After a promising introduction about the author’s childhood fascination with mercury, the first chapter bogs down in an explanation of atoms too brief for those new to chemistry to make much of it. A dull summary of the men who created the periodic table follows. Those who make it through the first chapters will be rewarded by more-interesting, even dramatic topics such as chemical warfare, atomic bombs, and poisonous elements. Kean has collected numerous anecdotes and groups them together loosely by similarities. While the stories within chapters tend to be chronological, the book zigzags back and forth through history. Almost all the players are adults, mostly white men, with the exception of a teenage boy who tried to build a nuclear reactor in his backyard. Occasional colloquialisms (“yuck”) seem aimed at younger readers, but overall the adaptation makes few concessions to its audience. For example, the terms “quantum mechanics” and “nuclear fission” appear with little explanation.&nbsp;(A closing glossary helps to compensate for this.) The text refers to Albert Einstein’s letter to President Franklin D. Roosevelt about “starting the Manhattan Project” without further description, assuming readers have previous knowledge. Not for a general audience, this will most likely attract readers already in their element among beakers and Bunsen burners. (bibliography, index) (Nonfiction. 11-14)

Sam Kean gets called Sean at least once a month. He grew up in South Dakota, which means more to him than it probably should. He’s a fast reader but a very slow eater. He went to college in Minnesota and studied physics and English. He taught for a few years at an experimental charter school in St. Paul, where the kids showed up at night. After that, he tried to move to Spain (it didn’t take) and ended up in Washington, D.C. He has a master’s degree in library science he will probably never use. He wishes he had a sports team he was passionate about, but doesn’t, though he does love track & field.

The Disappearing Spoon on Amazon

The Disappearing Spoon on Goodreads