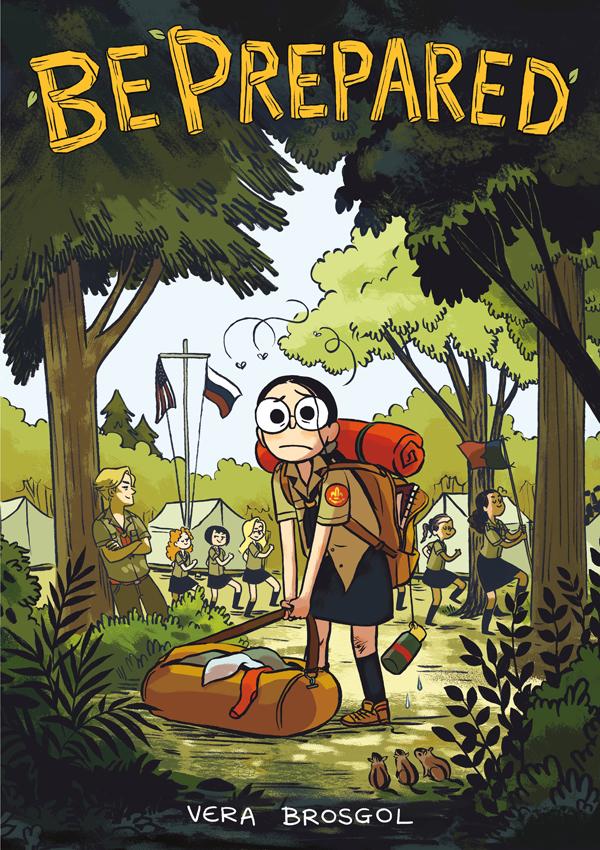 In Be Prepared, all Vera wants to do is fit in—but that’s not easy for a Russian girl in the suburbs. Her friends live in fancy houses and their parents can afford to send them to the best summer camps. Vera’s single mother can’t afford that sort of luxury, but there’s one summer camp in her price range—Russian summer camp.

Vera is sure she’s found the one place she can fit in, but camp is far from what she imagined. And nothing could prepare her for all the “cool girl” drama, endless Russian history lessons, and outhouses straight out of nightmares!

Booklist starred (April 15, 2018 (Vol. 114, No. 16))
Grades 6-9. Vera feels too Russian for her friends in Albany. She can never quite get the hang of sleepover birthday parties, and she’ll never have expensive toys like they do. So when she hears about a summer camp just for Russian American kids, she’s sure she’s finally found her place. But she’s much younger than her tent-mates, and—impossibly—she’s not Russian enough to fit in. She stumbles over the language, doesn’t know all the songs, and generally can’t quite get a handle on roughing it. But what’s more Russian than suffering? With fantastic pacing and poignant emotional turns, Brosgol’s winsome graphic memoir hilariously captures the lengths kids go to in order to fit in as well as the author’s growth from a girl desperate for a place to belong into someone confident enough to stand up for herself. Brosgol’s pitch-perfect art varies between serene, contemplative snapshot-like images of nature and comedic scenes between Vera—cartoonishly drawn with huge, goggle-eyed glasses—and her friends and campmates, all of whom appear in a relatively realistic style. Even though it’s rendered only in black, white, and olive green, Brosgol’s artwork has immense depth, from the facial expressions and gestures to the spot-on visual gags, and she strikes a perfect balance between heartfelt honesty and uproarious, self-deprecating humor. Perfect for fans of Shannon Hale’s Real Friends (2017), this will easily lodge a place in readers’ hearts, even as it has them rolling in the aisles.

Horn Book Magazine (May/June, 2018)
“This book is a true story. And also made up.” Brosgol’s (Anya’s Ghost, rev. 7/11; Leave Me Alone, rev. 9/16) fictionalized graphic memoir captures the ups and downs (let’s be honest—mostly downs) of a stint at a Russian Orthodox summer camp. Feeling like an outsider at school, Russian American preteen Vera is initially thrilled to attend camp with other Russian kids. Once there, however, she struggles to adjust to the strict rules, lack of modern electricity and plumbing, and drama involving her significantly older tentmates. The story’s visual narrative, exposition, and dialogue are in balance as inky illustrations fill smartly placed panels. The tone is accessible, vulnerable, and hilariously kid-centric (there are plenty of potty references). Angle brackets in the speech bubbles indicate dialogue spoken in Russian, and untranslated words and signs build atmosphere. A monochromatic palette using shades of army green reinforces the natural setting, and a cliffhanger ending leaves the door open for a sequel. Gaps between fiction and reality are clarified in an author’s note, which also includes primary documents: real-life photographs and a letter written by Vera to her mom (“Love, and homesick and crying, Vera. P.S. My stomach hurts every night. It does right now, too”). The story, both culturally specific and universal, is a welcome addition to the growing canon of comics by talented women cartoonists (Raina Telgemeier, Tillie Walden, Zeina Abirached, Cece Bell, and many others) based on their own lives. elisa gall

Vera Brosgol was born in Moscow, Russia in 1984 and moved to the United States when she was five. She received a diploma in Classical Animation from Sheridan College, and currently works at Laika Inc. in Portland, Oregon drawing storyboards for feature animation.

She has done illustration work for clients such as Nickelodeon, Sony Computer Entertainment, and Simon & Schuster. Her first graphic novel, Anya’s Ghost, was published in 2011 by First Second Books.

She loves knitting, baking, and trying not to kill her plants. She hopes you are enjoying looking at her drawings!

Be Prepared on Amazon

Be Prepared on Goodreads